Scenery like nowhere else: Route with a view of Mt. Fuji behind Miho-no-Matsubara 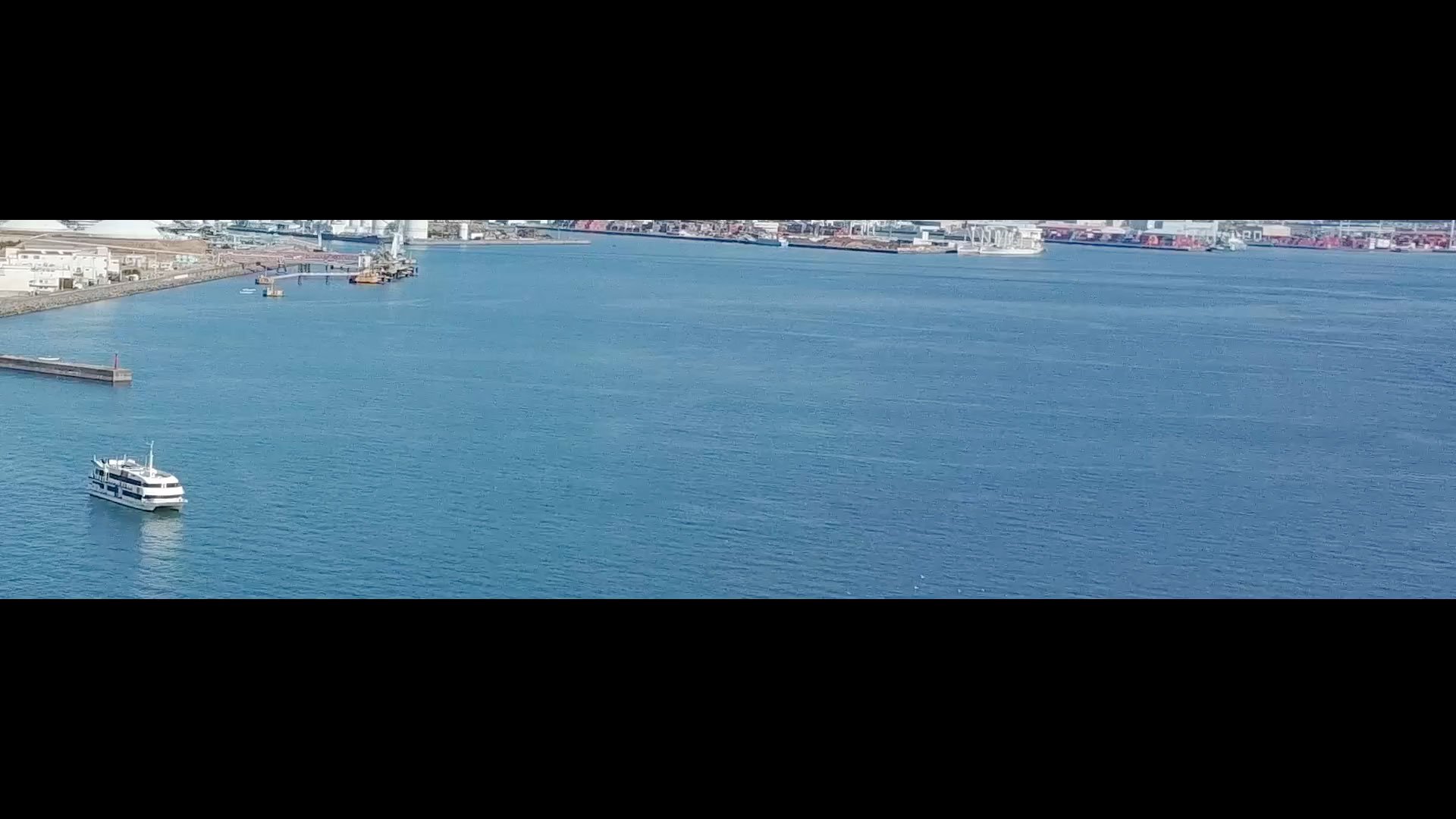 On sunny days, you can enjoy great views of the sea, the clear sky, and majestic Mt. Fuji on the Mt. Fuji & Shimizu Port Cruise.
Shimizu Port has a long history, and is counted as one of the three most beautiful ports in Japan alongside Kobe Port and Nagasaki Port.
From ancient times to modern times, Shimizu Port developed as a base for logistics and the military,making it one of the leading trade ports in Japan since it was opened in 1899, and laying the foundation for the port as it exists today.
The panoramic view from the sea that you can enjoy on the deck of the cruise ship “Bay Promenade” is fresh and will forever be a cherished memory.

On a clear day, there is scenery you will not want to miss! 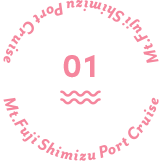 Only in Shimizu Port can you enjoy a view of the port scenery and Mt. Fuji, a world cultural heritage site, from on the sea. From autumn to spring when the air is clear, there are truly exceptional views of the port and Mt. Fuji capped with snow. Especially in the morning hours in the spring, there is a greater chance of seeing Mt. Fuji covered in a thick blanket of snow.
In the summer, Mt. Fuji rises like a silhouette in the summer sky, striking and regal in its majesty.
At dusk, “Red Fuji” takes on a fantastical appearance bathed in the sunset glow. The scenery changing throughout the hours of the day are another highlight of the cruise. Come enjoy the sight of ships sailing through the port, beautiful natural scenery, and the graceful figure of Mt. Fuji.

Not just Mt. Fuji!
The more you learn, the more fun you will have in Shizuoka!

The charm of Shimizu Port 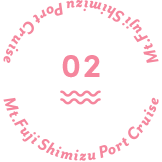 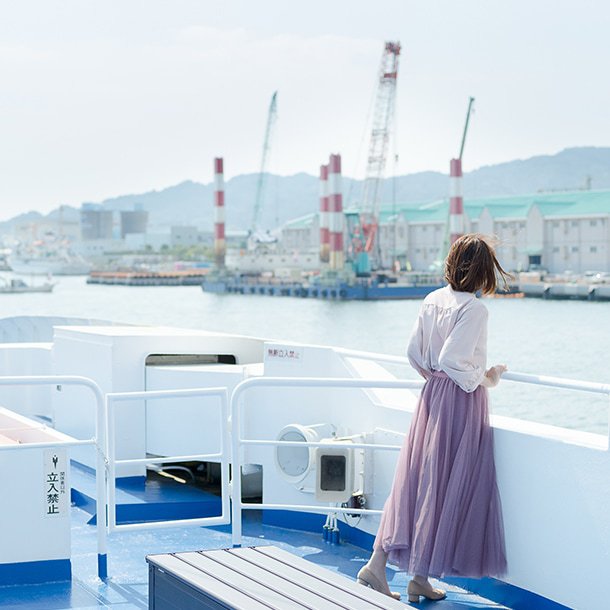 In 2019, Shimizu Port celebrated the 120th anniversary of its opening. From the water of the port, you can see that there are many industrial bases in the area, including trade wharfs, deep-sea fishing bases, shipbuilding yards, seafood processing companies, and more. Looking 360˚ around the port, you can see the Miho Peninsula, Nihondaira, the surrounding mountains, Izu Peninsula, and other natural scenery. Cloudy days when Mt. Fuji is shrouded are the best days to take the Mt. Fuji & Shimizu Port Cruise. Here we offer some tips to help you experience the full charm of Shimizu Port.

Take a cruise with adorable seagulls! 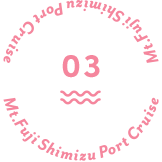 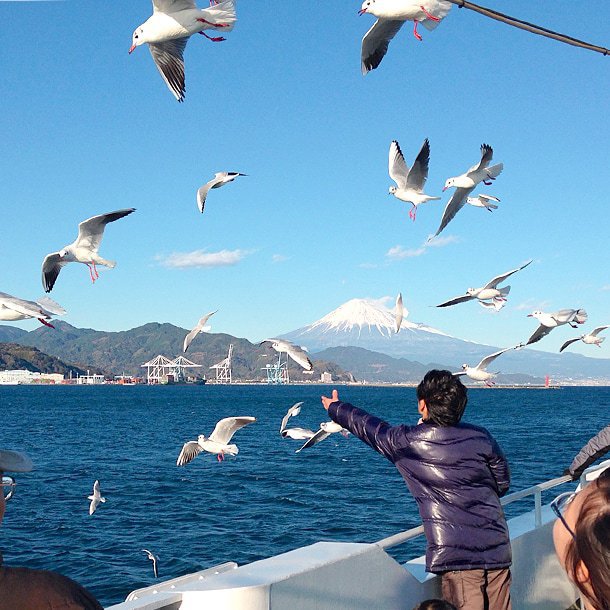 Flocks of black-headed gull fly from the Asian mainland every year from November to March. They are distinguished by their red beaks and feet, and are lovely to watch as they cross paths with the cruise ships.
You can also enjoy a seagull feeding experience on the 3rd deck floor.
This is an autumn and winter tradition that can be enjoyed by children and adults alike. 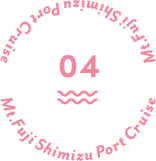 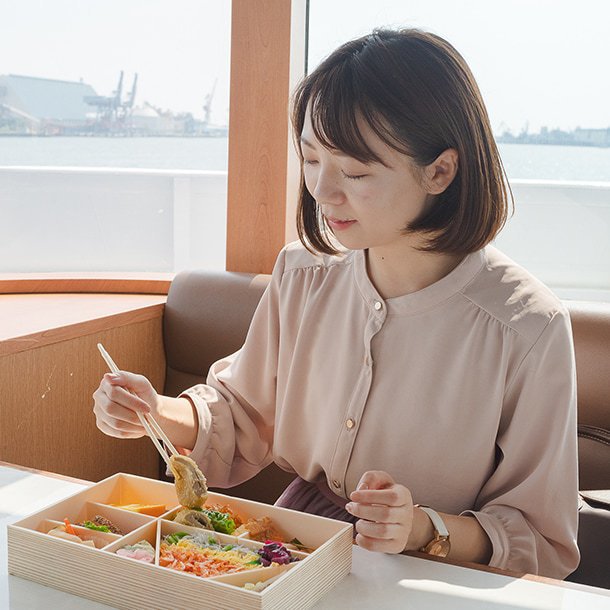 Bento (box lunches) are a fixture of travel culture in Japan as meals you can eat on the go. Ekiben (train station bento), soraben (airport bento) and other bento lift the spirits of travelers.
Some people enjoy the anticipation, waiting to open their bento until after departure.
Colorful “Funaben” (ship bento) are packed with delicious food from Shizuoka. Have a wonderful lunch while you enjoy the changing scenery from onboard the ship.

This sightseeing ship makes leisurely cruises around Shimizu Port, which is said to be one of the three most beautiful ports in Japan.
We offer two courses: a circuit course, and a mini-sightseeing course that allows passengers to get on and off at the Miho Platform. This sightseeing ship with a view of Mt. Fuji behind Miho-no-Matsubara, just like a scene from an ukiyo-e woodblock print, is truly unique to Shimizu Port.
On afternoon cruises, you can enjoy a “Funaben Lunch” and in autumn and winter you can cruise alongside black-headed gulls overwintering in Japan. Children can try the “Kid’s Captain Costume” experience (free of charge), that gives them the chance to wear a captain’s uniform onboard the ship.

Feel the freedom of a 360˚ view on the panorama deck!

The Bay Promenade has an eye-catching hull, painted in rainbow colors. It is used a sightseeing ship for the Mt. Fuji & Shimizu Port Cruise.
The vessel has three floors, is stabilized with a catamaran hull, and the guest cabins on the first and second decks are fully enclosed in glass windows, making them feel more spacious. You can relax and enjoy the scenery from a space with tables and seats separated by partitions.
The third floor features the pride of the ship, a panorama deck with a 360˚ view. It offers views of Mt. Fuji, Miho-no-Matsubara, Nihondaira, and even the Izu Peninsula far off in the distance.

Depending on circumstances, other vessels may be substituted without notice.